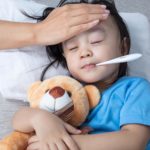 On 2/15/19 at 7:01 AM Share Health Health officials have warned twice as many children in San Diego have been diagnosed with a disease which can cause heart failure so far in 2019 compared with past years. The San Diego County Health and Human Services Agency said on Thursday that 16 cases of Kawasaki disease have been identified in the state since the start of the year.

Read the source article at Newsweek

Vitamin D may help prevent hormonal changes that can lead to bone loss among those being treated for HIV with the drug tenofovir, according to the results of a National Institutes of Health network study of adolescents with HIV.

Tenofovir is widely used to treat HIV infection.  However, the drug causes symptoms that resemble those of vitamin D deficiency ods.od.nih.gov/factsheets/VitaminD-QuickFacts, causing bones to lose calcium and reducing bone density.  The study found that large monthly doses of vitamin D reduced blood levels of a hormone that stimulates calcium release from bones.

“What we’ve found suggests vitamin D could be used to counteract one of the major concerns about using tenofovir to treat HIV,” said Rohan Hazra, M.D., of the Pediatric, Adolescent and Maternal AIDS Branch of the Eunice Kennedy Shriver National Institute of Child Health and Human Development (NICHD), the NIH institute that funds the networks.  “People in their teens and twenties may be on anti-HIV treatment for decades to come, so finding a safe and inexpensive way to protect their long-term bone health would be a major advance.”

The findings were published online in Clinical Infectious Diseases.

Vitamin D helps the body absorb calcium to build bones.  When the body is deficient in vitamin D, levels of a hormone called parathyroid hormone rise.  This rise triggers activity that draws calcium from bones.  As a result, the bones become more fragile and can break more easily.  Parathyroid hormone also tends to be elevated in people taking tenofovir, whether or not they have sufficient vitamin D.

Because parathyroid hormone levels are elevated in people taking tenofovir in much the same way as they are in people with vitamin D deficiency, the researchers theorized that vitamin D might counteract the bone-depleting effects of tenofovir.

The study was conducted by first author Peter L. Havens, M.D., of the Medical College of Wisconsin and Children’s Hospital of Wisconsin, Milwaukee; Dr. Hazra; Kathleen Mulligan, Ph.D., of the University of California at San Francisco; and other researchers affiliated with the Adolescent Medicine Trials Network for HIV/AIDS Interventions (ATN) and the International Maternal–Pediatric–Adolescent AIDS Clinical Trials (IMPAACT) Group.

The recommended daily dose of vitamin D is 600 units.  The authors noted that they observed no adverse effects from the vitamin D treatment during the 3 months of this study.

The researchers are now making plans for a two-year follow-up study to examine the longer-term safety of vitamin D in a similar group of HIV-infected youth taking antiretroviral regimens containing tenofovir, and to determine if the changes in parathyroid hormone result in improvements in bone density.

About the Eunice Kennedy Shriver National Institute of Child Health and Human Development (NICHD): The NICHD sponsors research on development, before and after birth; maternal, child, and family health; reproductive biology and population issues; and medical rehabilitation.  For more information, visit the Institute’s website at http://www.nichd.nih.gov/.

About the National Institutes of Health (NIH): NIH, the nation’s medical research agency, includes 27 Institutes and Centers  and is a component of the U.S. Department of Health and Human Services. NIH  is the primary federal agency conducting and supporting basic, clinical, and  translational medical research, and is investigating the causes, treatments,  and cures for both common and rare diseases. For more information about NIH  and its programs, visit www.nih.gov.

The above story is reprinted from materials provided by National Institutes of Health.

How many carbs should I eat per day if I am on a keto diet? This is a very frequent question we … END_OF_DOCUMENT_TOKEN_TO_BE_REPLACED